People with the ESTJ personality type are organized, honest, dedicated, dignified, traditional, and are great believers of doing what they believe is right and socially acceptable. Though the paths towards “good” and “right” are difficult, they are glad to take their place as the leaders of the pack. They are the epitome of good citizenry.

Are you an ESTJ? Take the free personality test!

People look to ESTJs for guidance and counsel, and ESTJs are always happy that they are approached for help. ESTJs love being role models and organizing community events that bring groups and families together, especially if the occasion calls for upholding tradition and values.

Extremely organized
Many US presidents have the ESTJ personality type. It is no wonder that they do, of course, since the ESTJ is a firm advocate of following the law and earned authority, and abhors laziness on the job. ESTJs are always up for a challenge. They have the innate ability to make the most complex of tasks seem easy. Not only do they like working towards a goal, but they are extremely organized while working towards that goal. Having utmost admiration for dedicated and hardworking individuals, ESTJs believe that hard work and manual labor build character.

Judgmental
Being extroverts, ESTJs don’t like working alone. They do like working with people, and expect others to be as dedicated and hardworking as they are. This leads ESTJs to react negatively (or explode at times) when they feel like those around them are lazy, unreliable, or dishonest. ESTJs live in a world of facts – facts that can be observed, felt, touched and experienced. They are so sure of what they know and believe in that anything that doesn’t coincide with their set standards and principles is considered wrong and unacceptable. Unable to tolerate uncomfortable and unconventional situations, ESTJs easily fall into the trap of being judgmental. Anything new or different can cause an ESTJ personality type stress, and they would rather do things the way they have always done them. Comfort means reliability, and being forced out of their comfort zone means instability.

Are you an ESTJ? Take the free personality test!

Hardworking character
The two vital points that ESTJs have a hard time dealing with are being able to see that others have their own way of seeing things, and understanding that not everyone will want to take the same path as they do. While ESTJs have good intentions despite the seeming inflexibility, comprehending that other people in the group contribute in different ways will help them be better leaders. With their hardworking character, penchant for facts, and organizational skills, a bit of understanding towards other people will enable them to take on leadership roles that work for everyone. 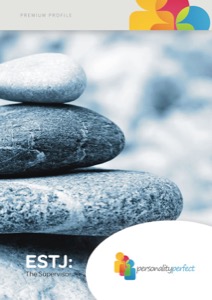 Understanding your personality is one of the most important things you can do to create a happy and fulfilling life. Read more about the ESTJ The Supervisor Premium Profile here!

Check out the Premium Profile for ESTJ The Supervisor!